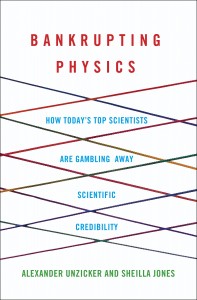 Yesterday’s claim that gravitational waves have been detected in the cosmic microwave background … I cannot help but posting a subchapter of Bankrupting Physics here (more  comments will follow soon):

If an electron hits its rare, exotic, mirror-image positron, both end their lives in a dramatic gamma-ray flash of pair annihilation. For that reason, particles such as the positron are called “antimatter.” Conversely, particle couples made of matter and antimatter can be generated out of a single photon just as well. Even the much heavier proton-antiproton pairs can be created if, of course, the photon’s energy is high enough to meet Einstein’s formula E = mc2. Antimatter puzzles physicists a lot. It hardly ever appearsin everyday life because it would promptly be annihilated by its counterpartin normal matter, but it is always present when new particles are created. The heavier the particles are the more effort is needed in big colliders to produce them, so it is sometimes speculated that these particles could have been formed cost-free shortly aft er the Big Bang, in the so-called primordial phase of tremendous heat. It’s a wonderful idea, but unfortunately it is also untestable. How could the information about high-energy particle creation and annihilation survive for 380,000 years in a sizzling hot soup?

Notwithstanding this, I have heard conference presentations in which people in all seriousness talk about their hope to detect such “signatures” of pair annihilation in the cosmic microwave background. This is already absurd because of the complexity of what happens to radiation aft er it is released at the end of the plasma era, but especially because we know literally nothing about what happened prior to that. How many physical processes could have superimposed themselves on the radiation and rendered any “signature” void by this point!

You can compare such a data analysis to that of satellite images of the ocean surface. We can ascertain the sea level to the centimeter, and infrared images can tell us the exact temperature. Thus, one can clearly identify the gulf stream of the North Atlantic, maybe even deduce the salinity and the algae percentage from a spectral analysis. And if you’re lucky, you read the wind speed from the ripples on the water. But fi nding primordial particles on the WMAP chart would be as if, by analyzing the movement of the ocean surface, you would identify deep sea fish and classify them zoologically. Th is doesn’t mean, of course, that there aren’t several research groups devoted to doing exactly this.

Who does not lose one’s mind while reasoning about certain things, has nothing to lose – Gotthold Ephraim Lessing

3 thoughts on “Fairy Tale Stories near the Big Bang”