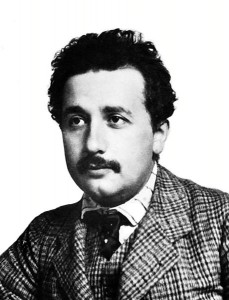 Problems cannot be solved by thinking the way we thought when we created them. – Albert Einstein

The incompatibility of quantum mechanics and gravity is seen as a big issue by all physicists. The Planck length

contains the gravitational constant G and Planck’s quantum h, and therefore it is the scale at which “quantum effects of gravity” are supposed to become important. But that is all what physicists have found out about quantum gravity. No theory exists, let alone any evidence of an observable effect. You’ll find the topic somewhat more elaborated in Hawking’s book A Briefer History of Time. The chapter about quantum gravity is comprised of 21 pages, of which almost 20 pages are devoted to repeating gravitation and quantum theory. Andrzej Staruszkiewicz, editor of a renowned physics journal, commented on this topic:

It is tempting to assume that when so many people write about “quantum gravity”, they must know what they are writing about. Nevertheless, everyone will agree that there is not a single physical phenomenon whose explanation would call for “quantum gravity”.

The fact that no theory for quantum gravity exists does not preclude the existence of numerous experts of quantum gravity. According to the science historian Federico di Trocchio, such a „second category of experts“ consists of those whose knowledge will become immediately obsolete once the riddles scientists are studying have been understood. They make their living on the problems that are being tackled unsuccessfully, or, like some string theorists, make ridicuous claims of having explained „the existence of gravity“.

There is simply no theory that combines general relativity with quantum theory. All theoretical recipes cooked up until now have failed, as for instance the so-called ADM formalism, a reformulation of Einstein’s equations of general relativity. It has gotten nowhere, but it is nevertheless considered a bible leading the way. Another great couturier of theories is Abhay Ashtekar, who regularly summarizes the accomplishments of the Loop Quantum Gravity he fathered. His résumé:“it is interesting”.Actually, it is interesting for 30 years now. Not exactly news anymore. But I fear that we will have a long wait for such a Theory of Everything that eventually unifies quantum gravity and general relativity. Success just comes in different flavors.

Theoretical physicists seem to have deployed a number of assumptions that block deeper reflection. For instance, there is the belief in an unalterable gravitational constant G. Solely for this reason, all theoretical attempts trudge through the Planck length’s eye of a needle and come across as trying to push a door which is labeled “pull”.

The essence of the problem – and I think the only thing worth worrying about – is just this: The ratio of the electric and gravitational force of a proton and an electron that form a hydrogen atom is a huge number and nobody knows where it comes from. Period. The only idea with respect to this riddle came from Paul Dirac, the Large Number Hypothesis. – more about that later. Where does that number, 1039 , come from? Beware wannabe unifiers: either you explain it or you had better shut up.

(with quotes from „Bankrupting Physics“ and „The Higgs Fake“)

4 thoughts on “A Brief History of Quantum Gravity”