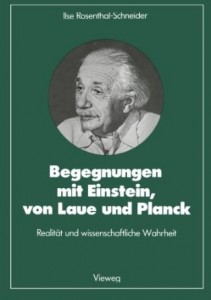 Reality and Scientific Truth: Discussions with Einstein,von Laue and Planck is a collection of conversations between Einstein and Ilse Rosenthal-Schneider, a lady who took a PhD in philosophy in Berlin around 1920. After fleeing the Nazi regime in 1938 and settling in Australia, she continued her discussions with Einstein by letter. The book is a unique source of the views Einstein held about the fundamental constants of physics. It is worthwhile to compare them with some modern opinions on the subject.

In a letter dated May 11th, 1945, Einstein wrote that he believed that numbers “arbitrarily chosen by God” do not exist and that their “alleged existence relies on our incomplete understanding”. Similarly, he contended in a letter of March 24th 1950 that “dimensionless constants in the laws of nature, which, from a rational point of view, could have other values as well, shouldn’t exist”.

Such a statement obviously refers to numbers such as the inverse of the fine structure constant (which is about 137), which is reminiscent of Richard Feynman, who forty years later wrote in a very similar vein: “It’s one of the greatest damn mysteries of physics: a magic number that comes to us with no understanding by man. You might say, ‘the hand of God’ wrote this number, and we don’t know how He pushed his pencil.” At the same time, Feynman advised his colleagues that: “All good theoretical physicists put this number up on their wall and worry about it.”

It is interesting that both Einstein and Feynman seemed to be convinced that this was a puzzle to be tackled while at the same time being aware that such a conviction was not testable in a strict sense. Einstein, in another letter from Oct 13th, 1945, wrote: “Obviously, I can’t prove that. But I cannot imagine a reasonable unified theory which contains a number that could have been chosen differently by a whim of the creator.”

Since then, the attitude of physicists toward fundamental constants seems to have changed. Modern cosmology, for example, has terrific data, and Michael Turner of the University of Chicago explained in 2010 in Munich how these observations are accommodated using a couple of parameters by the current ‘concordance model’ of cosmology. After the talks at the Siemens foundation, there is always an ample possibility for discussion (and a very nice buffet). Turner, as he admitted frankly to me, is not very interested in the initial conditions of the universe such as density, photon to baryon ratio or similar stuff. He would be happy to find the correct equations that would make the world go, rather than bothering with how it got started. No doubt, however, these initial conditions (although Einstein would have been delighted by the data) are numbers he would have sought to explain using the theory. All these numbers make the world a little more complicated than it should be in principle. “A theoretical construction has little chance to be successful, unless it is very simple” Einstein wrote on April 23rd, 1949, and here he was certainly in agreement with Isaac Newton’s credo: “Truth is ever to be found in simplicity, and not in the multiplicity and confusion of things.”